The same page is used to create a new group or to edit an existing group with some minor differences. When a new group is created, the page will automatically change to allow editing of the group, including assigning the students to the group.

Two fields of data are required to create a new group: the type of group and the group name

Choose the appropriate type for the group that you are creating. By creating specific group types, it is easier for dismissal staff to find the appropriate individual group to designate that children have arrived for that group.

This is the text name that will appear adjacent to the student name when the group is dismissed.

The color that the text name of the group will appear on the screen. The default color is black. On advanced browsers such as Google Chrome and Mozilla Firefox, the color box will generate a pop up window to select the color. On older browsers it is necessary to enter the color using RGB hex color codes beginning with #. 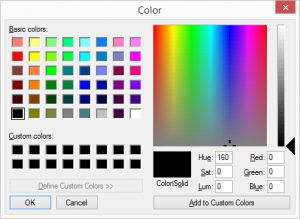 A specific reference to a location for a group. For example, a group such as Chess Club may have a location specified such as Media Center. Alternatively, no default needs to be set for the group and alternate locations may be specified on those days in which a change from the standard location occurs.

If a dismissal user is not signed in at the specified time or not viewing the Desktop, the group will not automatically post.

The value for the time field must be entered in military time, where 15:10:00 is the equivalent of 3:10 PM. Some browsers, such as Google Chrome will provide a useful time input field.

Other browsers will provide a much less intuitive experience.

For groups to post automatically, at least one active dismissal account must be signed in and viewing the Desktop view

When a group already exists, additional options for editing the group will appear.

An existing group may be deleted. When it is deleted, the group and all student associations, including daily exceptions, will be permanently removed. This operation is not recoverable.

The Group Assignment page describes the processes by which students may be added or removed from groups.